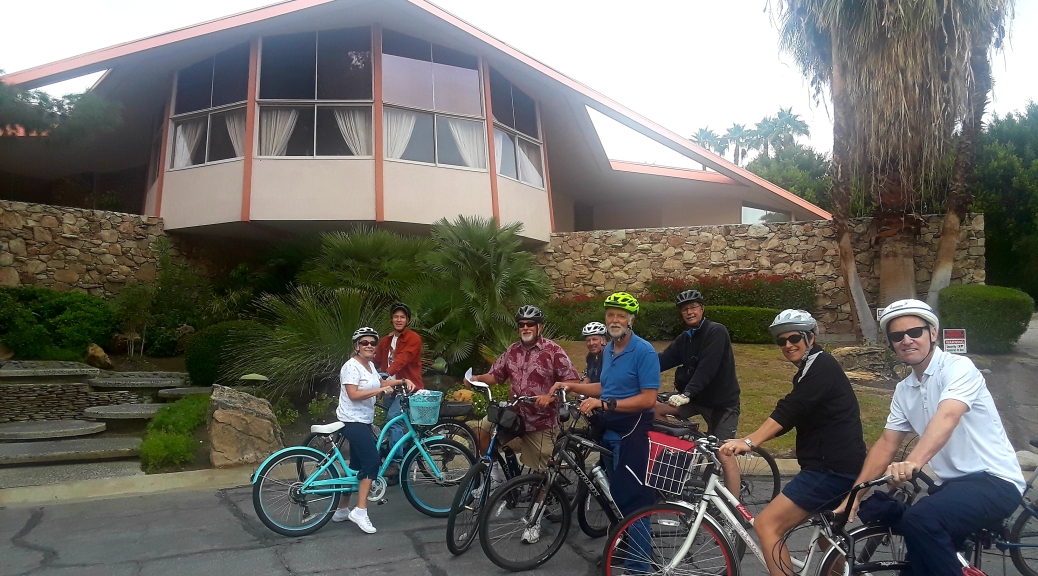 Palm Springs is one of the most interesting and fun towns to ride around in Southern California, especially when the weather is picture-perfect from fall through early spring.  A stunning mountain backdrop, frequently capped with snow, contrasts to the modified desert landscape of palms, cacti and colorful flowering shrubs. Whereas much of the Coachella Valley is hidden behind walled communities, most of Palm Springs’ communities are available to explore by bike. Architecture ranges from Mid-Century Modern to Spanish colonial, and a vibrant downtown is bursting with inviting restaurants, many of which are al fresco and perfect to combine with your ride.

In the mid 20th Century, Palm Springs was the playground of the Hollywood elite, with many of the biggest stars spending time here in a myriad of homes, whether rented or owned. Although they came here to escape the pressure and scrutiny of Hollywood, they created their own melodrama here in the valley.  Details on who lived where is more reliable for some stars’ homes than others’, but the scavenger hunt through history makes this cycle down memory lanes a rewarding exercise. Pictured above is the Elvis Honeymoon Hideaway, which he and Priscilla rented in the 60’s.

In December 2018 I led 10 enthusiastic friends on enCYCLEpedia Southern California Ride PS1, “Palm Springs Vintage Star Tour – Where YOU Are the Star,” except instead of having them recite movie lines or sing songs of the various stars as outlined in the book, I played audio clips from movies or their songbook to bring history alive, and had them guess the former occupants based on those, while also regaling tales of yesteryear.  The stops came in clusters, with welcome cycling mileage in between as we explored the Old Las Palmas, Deep Well and Movie Colony Districts in a ride of 14 miles.  I actually added to what is in the book, which may have been a mistake, since the 40-odd stops ended up taking 4 hours, and we didn’t make it to lunch until 2:15, a delicious repast on the El Mirasol (North) patio.  Next time I’ll reduce the stops or plan the lunch for mid-ride……

The next opportunity, delayed by everyone’s schedules and then the Covid pandemic, came in April, 2021, on the date that was two weeks after my second Pfizer vaccine so that I could enjoy lunch with 14 pickleball pals and neighbhors.  Although a big group, it went very smoothly, and I shortened the route with less stops and skipping Deepwell to make it more manageable.