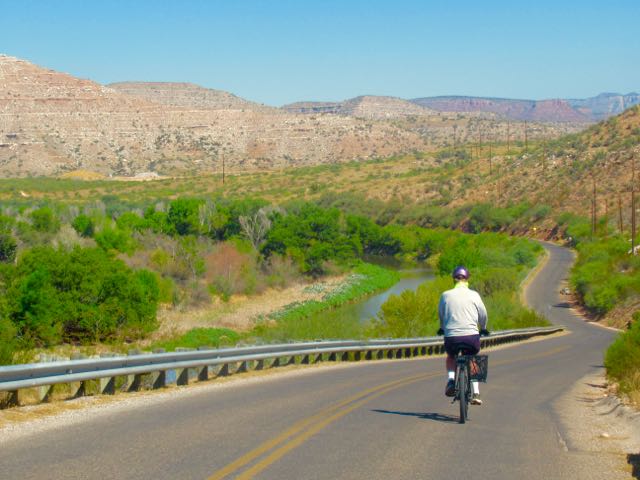 We enjoyed a 17.3 mile Camp ‘n Ride on a warm September day in the Clarkdale area of Northern Arizona. Clarkdale is near the towns of Cottonwood and Jerome, about 20 miles west of Sedona. We staged from the Rain Spirit RV Park, situated along the main road of Broadway on the southeast edge of town. The ride encompassed historic Clarkdale, Tuzigoot National Monument, and the paved first 5 miles of scenic Sycamore Canyon Road along the Verde River. On another day we continued on the dirt road for a few more miles.

Clarkdale is known to most northern Arizona visitors as the place to catch the scenic Verde Canyon Railroad ride. We experienced that excursion once in late November, a good time of year with fall foliage usually peaking in the area. The depot is accessed off a side road from Broadway near downtown, over a narrow bridge.

The small historic town of Clarkdale founded in 1912 was originally a company smelter town created by William A. Clark for his copper mine in nearby Jerome. The photos below show Jerome in the hills above, a smelter, a slag pile next to the Verde River, and a facility that recovers and repurposes the slag.

Clarkdale was an early example of a planned community, with telephone, telegraph, electrical, sewer and spring water services, making it very modern for its day, and the central part of town is on the National Register of Historic Places. The mine and smelter closed in 1953, and the town fell on hard times, though a Portland Cement company revitalized the economy somewhat.

Currently there are not many dining options in Clarkdale in contrast to booming Old Town Cottonwood and historic Jerome, each just a few miles away. An exception is Violette’s Bakery Cafe, in the center of Clarkdale in an old railway car serving delicious French-style breakfast and lunch on their outdoor patio, which made for a wonderful bike and brunch for us. Across the street is Arizona Copper Art Museum in the old High School building, and around the corner the central Clarkdale Park featuring a circa 1915 bandstand.

Adjacent to the southeast of Clarkdale is Tuzigoot (which means “Crooked Waters”) National Monument, a well preserved pueblo on a limestone hilltop built by the Sinagua people between 1125 and 1400 CE, overlooking an extinct oxbow in the Verde River. Admission is charged to walk around the ruins, but there is a free paved path with interpretive signs leading to a view deck near the oxbow, which is now an important wetland.

The Verde River flows through Clarkdale year round, and Sycamore Canyon Road, accessed off of the Tuzigoot access road, follows the river and leads to access points where many people set in with their river kayaks to float downstream to the south. The road is little used except for warm weekends by people driving to the river accesses, and on weekdays with some trucks that use a facility midway. There is one substantial hill en route and a few gradual hills. E-bikers will be happy to have some options on those, as we did with our Class I Townie Go’s. We stopped at the end of the paved section in about 5 miles at a cattle guard.

On another day we continued onto the unpaved Forest Service road past the cattle guard, which is not a 4WD road, but was still bumpy for our e-bikes. We found good paths though and it worked out fine. We felt like we were in the old west, with just chaparral and red rock cliffs beyond. We turned around in about 2.5 miles, but you can ride much farther and also explore scenic side roads.

Connecting the Tuzigoot access road and central Clarkdale is Broadway, the town’s main thoroughfare with bike lanes and an ample paved sidewalk/bike trail alongside it. In the other direction, toward Old Town Cottonwood, the sidewalk and bike lanes disappear for 0.8 mile.